Oh my goodness, you guys. Today is THE day. I am finally sharing my entryway mudroom tutorial! I have had so many requests to share this and I apologize that it’s taken me this long. I temporarily lost the photos that I took of the building process, but after some sleuthing around in the far reaches of my old computer files, I finally found the folder that they were in. #techproblems  Anyway, there is  A LOT to cover so I am going to go ahead and just get started. I will list sources at the very end, so be sure to check that out!

Take a look at the entryway in it’s sad former existence. Like I said in the mudroom reveal, I have been fawning over mudrooms since I first discovered Pinterest four-ish (or more) years ago. I was stuck in an apartment and dreamed about the day I would finally own a home and be able to have my very own mudroom. Well, of course as almost all first time home buying stories go, finances dictated how much home and character we could buy and none of the homes we were considering came with a mudroom. Never fear though! It was nothing my DIY loving heart couldn’t tackle. In the photo below I had traced an outline with chalk for what I was envisioning in my head of what I wanted the space to look like. 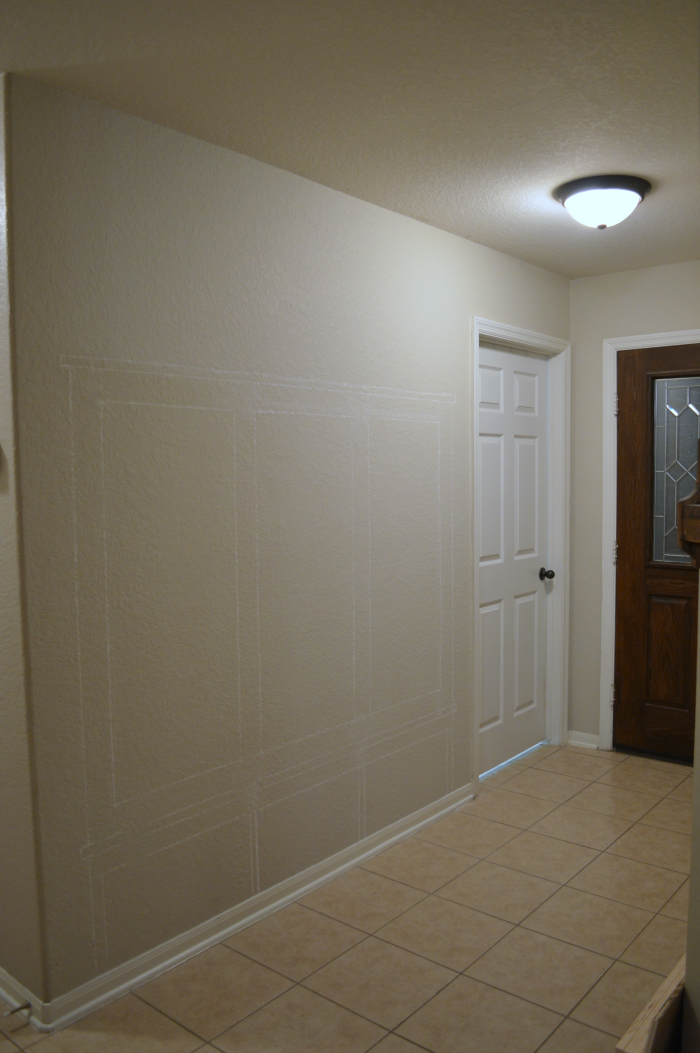 First we ripped off the baseboards so that the bench would sit flush up against the wall once we installed it. 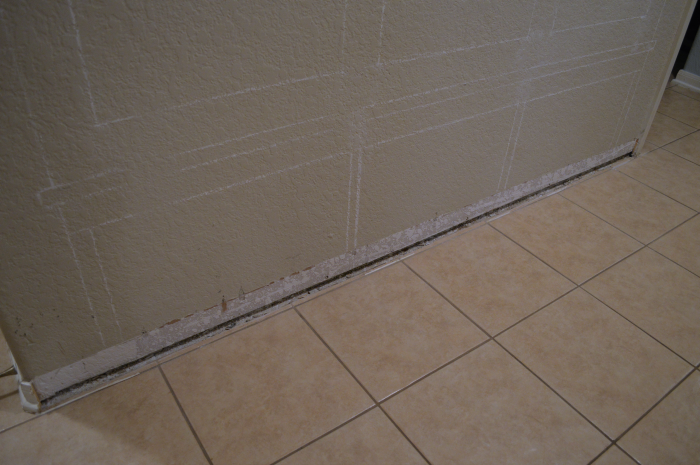 Then we started on building the bench base. We used some leftover 1/2″ thick plywood from the Printmaker’s TV Console for the cubby dividers and some 1×4 boards to connect them together and to act as cleats to nail the bench to the wall. This post contains affiliate links for your convenience. Click here to read my full disclosure policy. 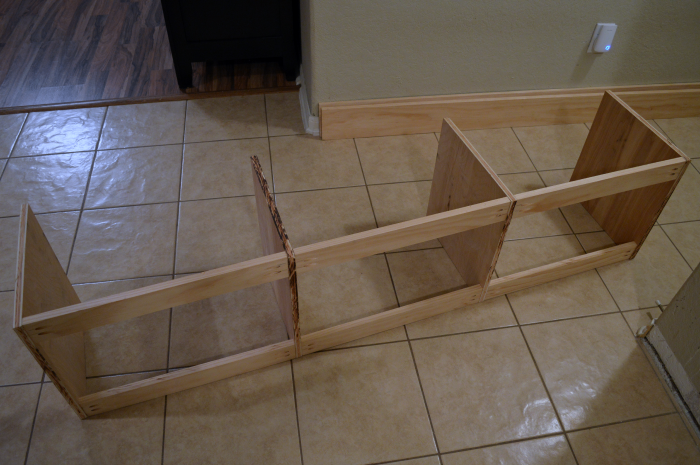 Everything was connected using 1″ pocket hole screws. We made sure to make the holes face towards the wall so that they would be hidden when everything was assembled. 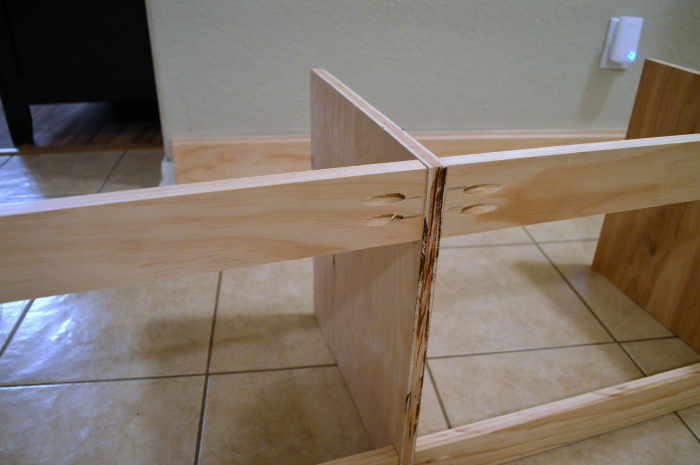 Here’s a look at the base pushed against the wall in place. 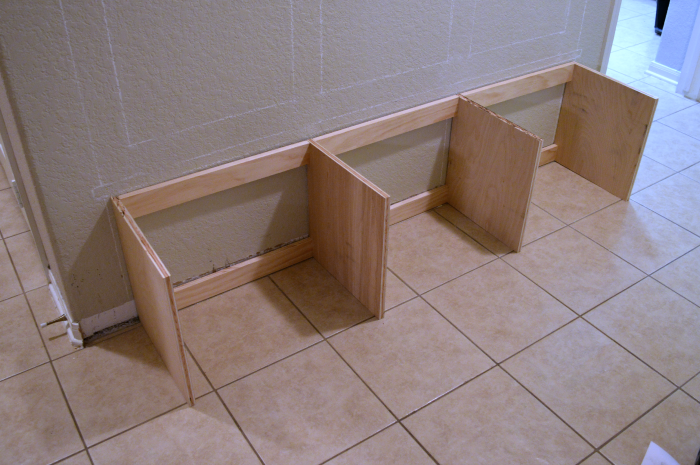 Before attaching the base to the wall we needed to add the shelves that act as the bottoms of the cubbies. They are attached 3 inches up from the ground using pocket hole screws. In the picture below the base is turned on its side with the front facing upwards. 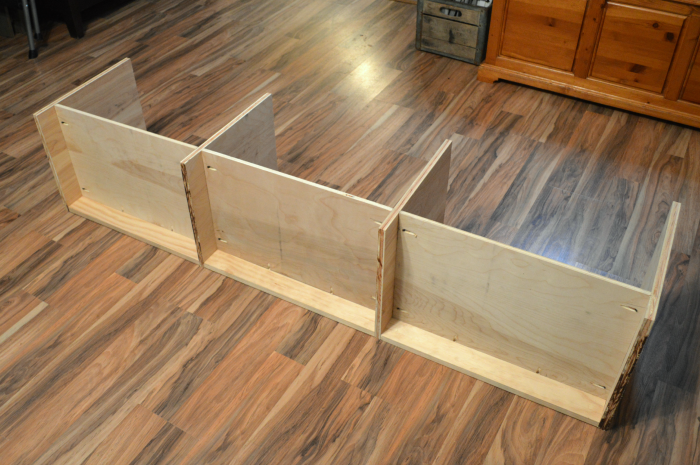 Next we turned the base upright and added support for the bench seat. The supports were made by screwing some spare 1×6 boards into the tops of the cubby dividers. You could use a full sheet of plywood if you want. We just wanted to use up what we had on hand and avoid spending more money. Can you see a theme here? 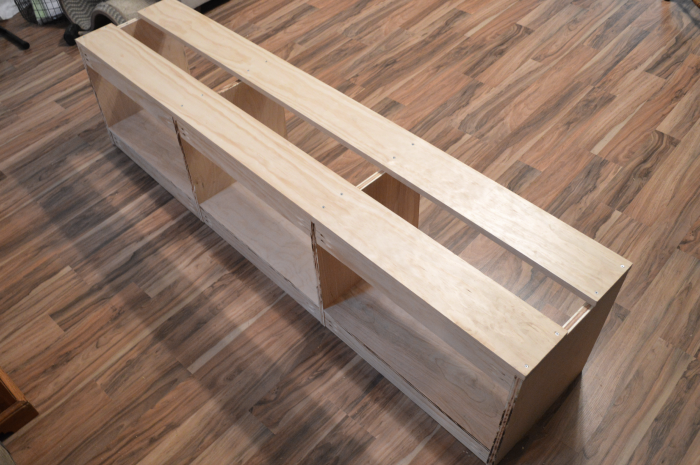 To cover up the open area below the cubby shelf bottoms, we nailed in some base trim in the form of 1×4 boards. I didn’t want to use the same baseboard as what we have around the house but I wanted the height to match, so this worked out well for that.

At this point we realized that we had sort of messed up and wouldn’t be able to secure the bench to the wall with the top and bottom base cleats, since we had just covered up any form of access to the bottom cleat when we nailed on the base trim. #fail  We figured that all was ok, though, and that securing it by the top cleat would be sufficient enough to keep the whole thing in place. We were right! 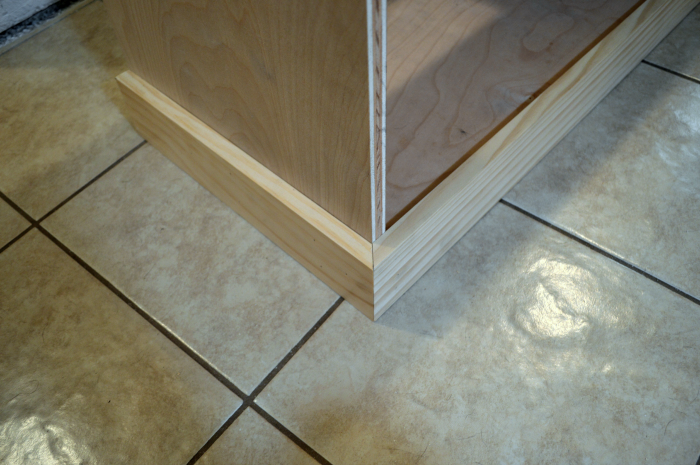 The bench was secured to the studs in the wall using long screws. I think they were 3 or 4 inches long- long enough to go through the cleat, drywall and into the stud. That bench is going nowhere! We tugged and nudged it to see if there was any wiggle and it was solid. Success!

After it was secured to the wall, trim was attached to the sides and front with wood glue and nailed in with a nail gun. The top trim pieces are a 1×3 boards. We trimmed out the front of the dividers with 1x2s. The sides of the bench were a little bit trickier since one side had the side of the front 1×2 to account for. In the picture below you can see that we used a 1×3 for the trim piece next to the wall and then we used a 1×2 for the other side, butted up against the front 1×2. Make sense? 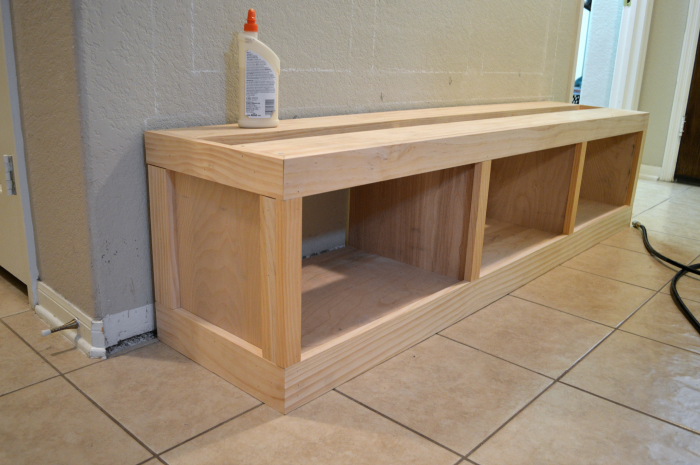 For the bench top, we used a piece of 1/2″ plywood and screwed it in from the underside of the bench seat supports. The plywood was cut flush to the dimensions of the bench base. 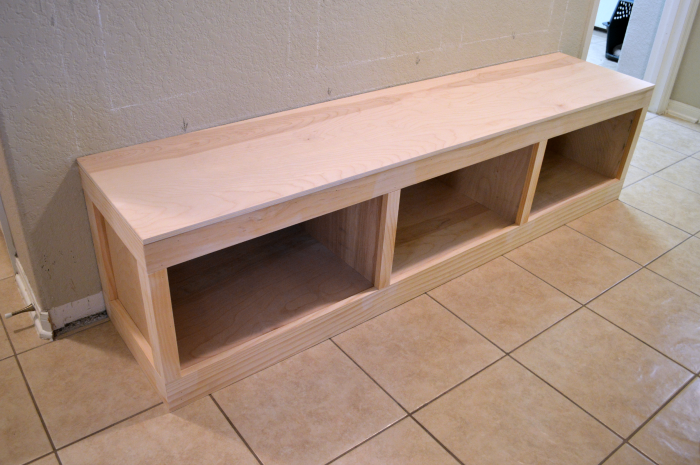 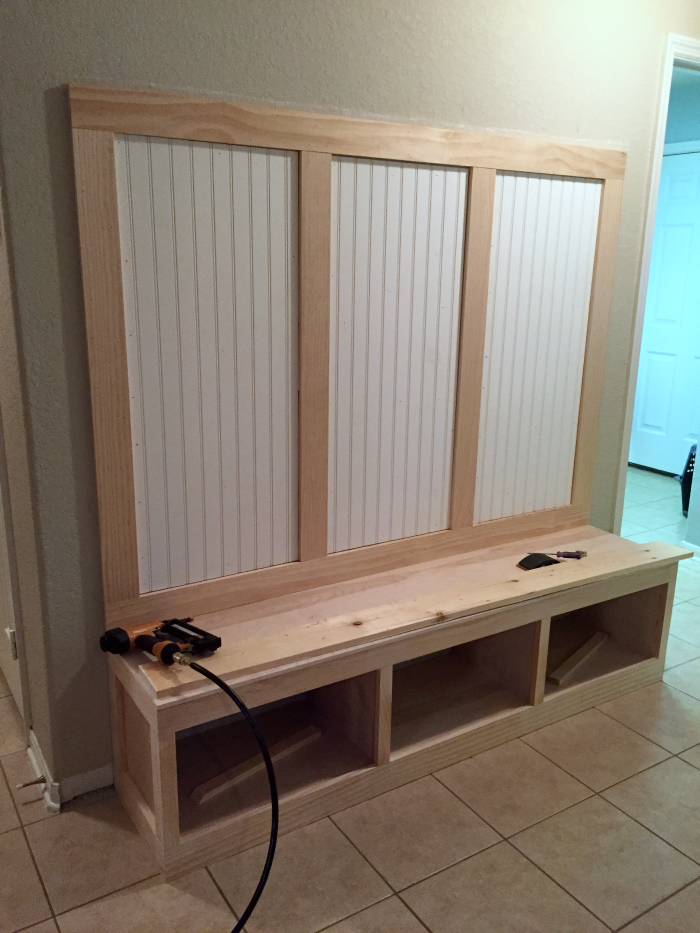 To cap off the top of the board and batten, we used a 1×3 and some cove moulding to add a little detail. The board overhangs by about 3/4 inch on each side. 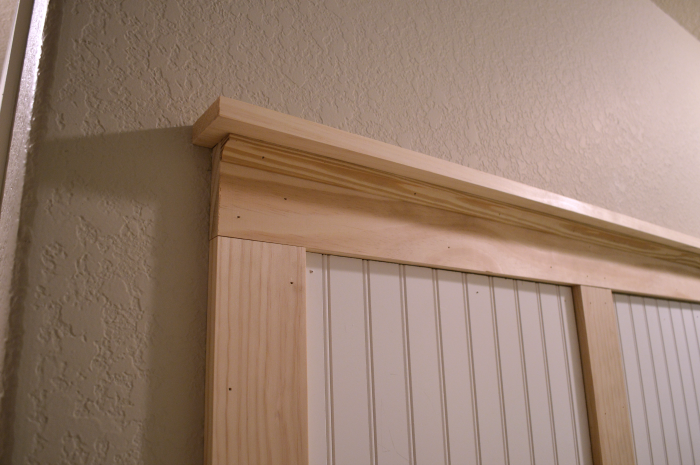 After all of that nailing, there were about 5 million holes and a few seams between the boards. I had the fun task of filling and sanding each and every last hole and caulking the seams. This is my least favorite part about DIYing. It’s so unbearably tedious. Elmer’s color changing wood putty is my absolute favorite wood filler. It goes on pink and turns white when it’s ready to sand.

You can also see that we trimmed out the bench seat with 1×2 boards to create a bit of overhang on the seat. The corners were mitered and the boards were nailed in with the nail gun. 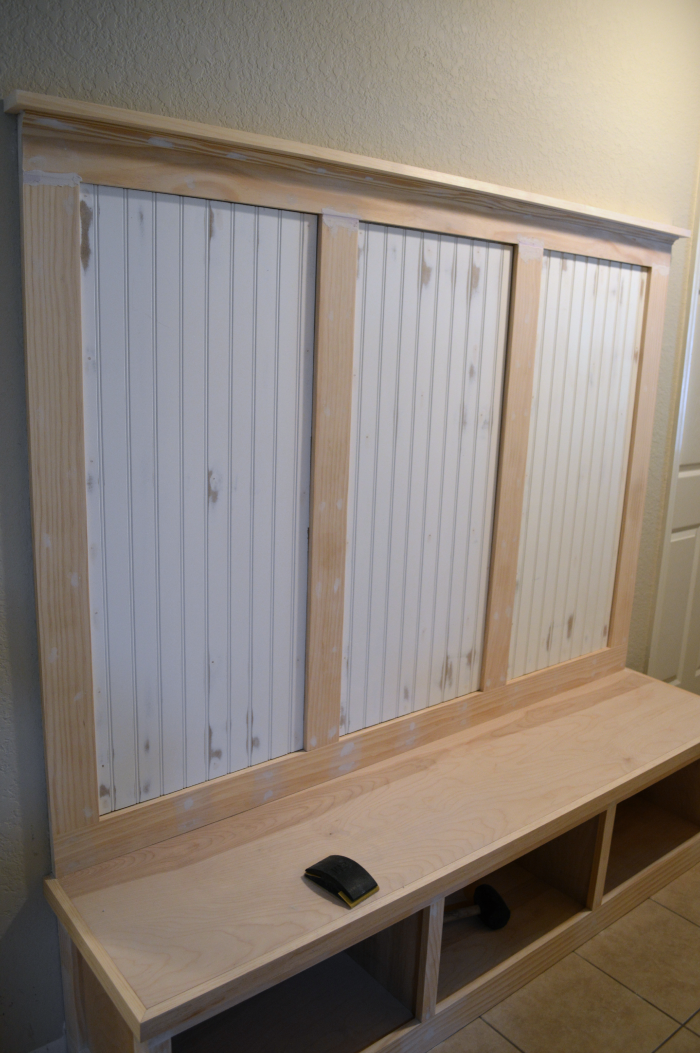 Next was the almost equally crappy task of painting the bench seat base. Those cubbies are a pain in the neck (literally) to paint inside of. Definitely grab a pillow or towel to sit on while you’re down there on the floor for the hour it takes to get the job done. I used a 6 inch foam roller and my favorite shade of Sherwin Williams white paint- Alabaster. I didn’t worry about getting paint on the floor because I knew that I’d be adding quarter round to the base board and it would cover it up. 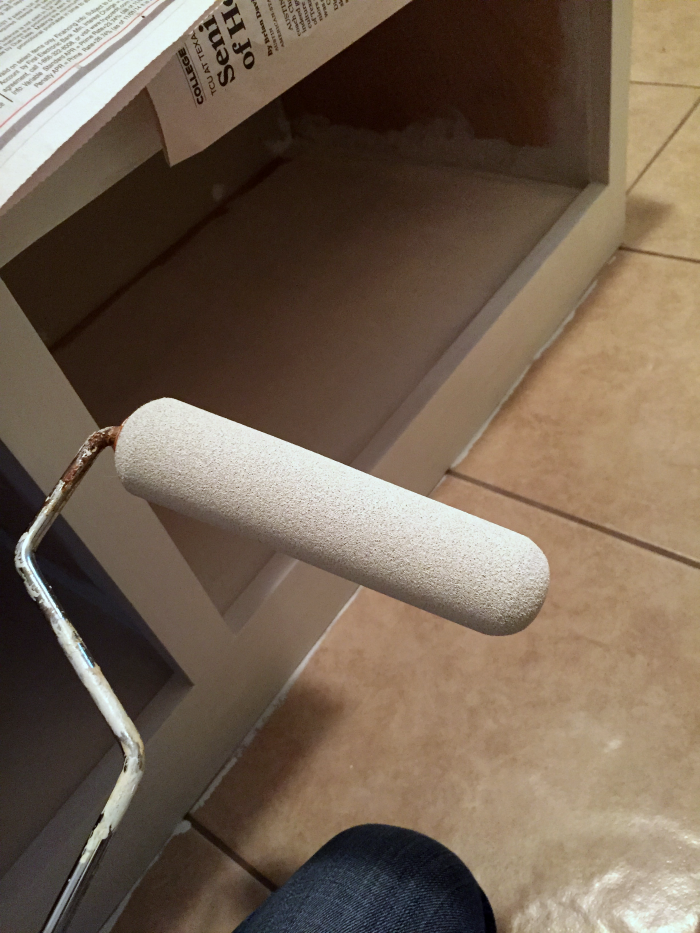 After the paint was dry, I taped off the board and batten so that I could apply my stain to the bench seat. I used Minwax Provincial for my stain. And I also forgot to photograph the stain after it was applied. #oops  You can see the quarter round that was added to the baseboard in the photo below. 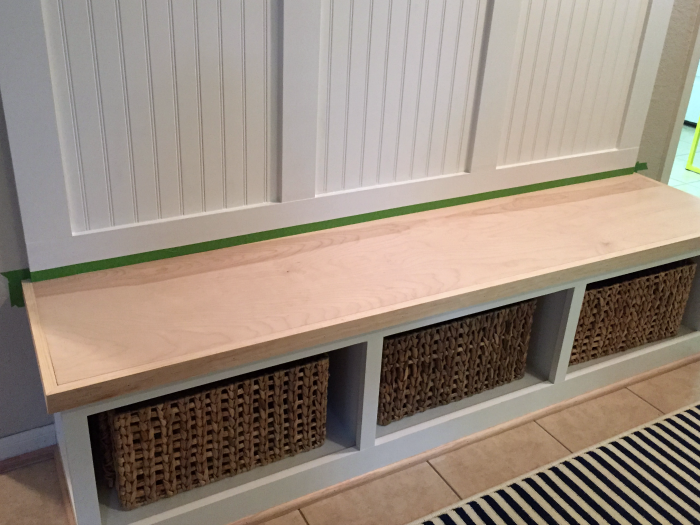 After everything was dried and cured, the last step was to add the hooks and accessories. I changed my mind about 4 times on which hooks to use. I already knew which rug I wanted but I couldn’t decide on the hook finish or which baskets. I put a call out to my friends on social media to get some help for my indecisiveness. 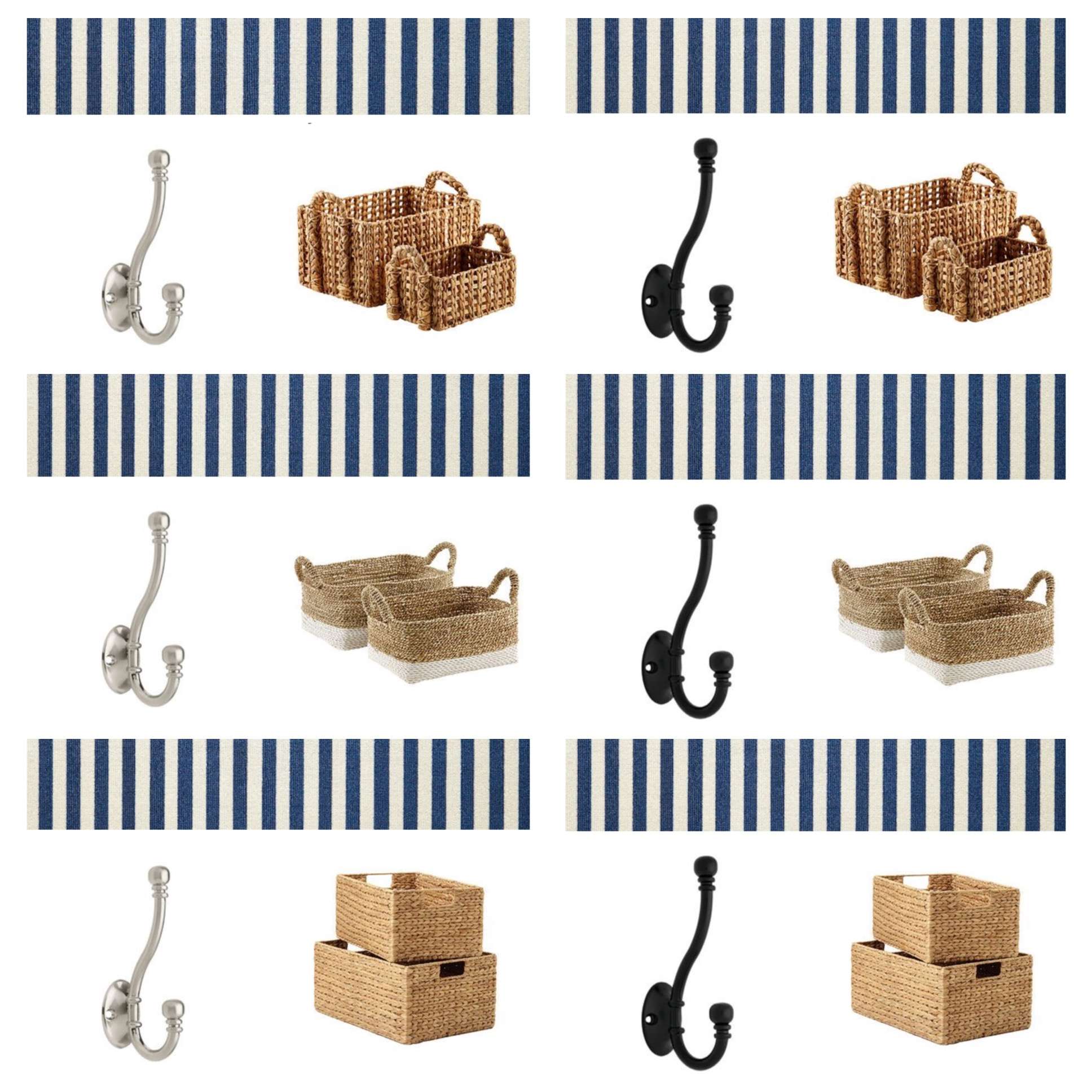 In the end the top right choice won out. I actually bought the white dipped baskets but the largest size the store carried was too small for the cubbies and didn’t look right. Bummer. You can bet they will be making an appearance somewhere else in my house, though. 🙂 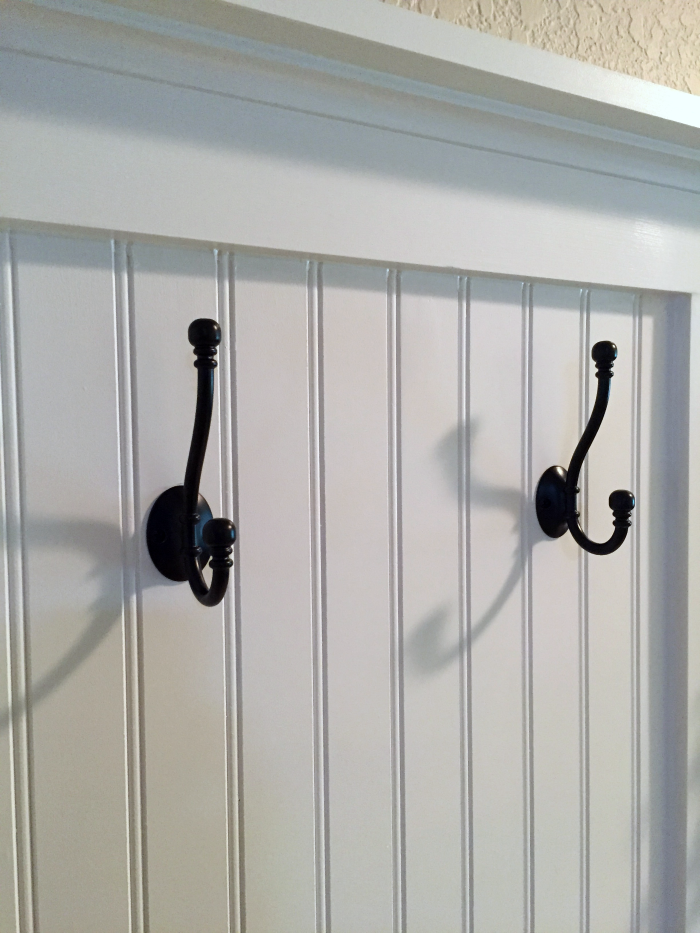 I am so happy with the finished product. It was quite an experience to build but it’s so gorgeous and adds so much needed storage. 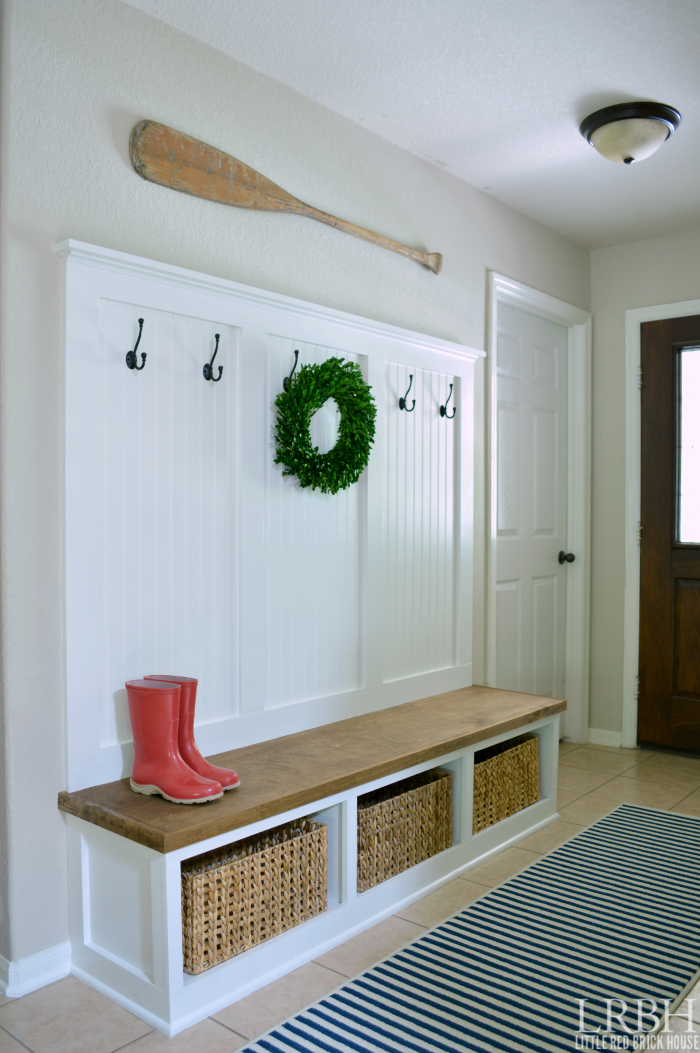 For more photos of the finished mudroom check out the entry mudroom reveal post! 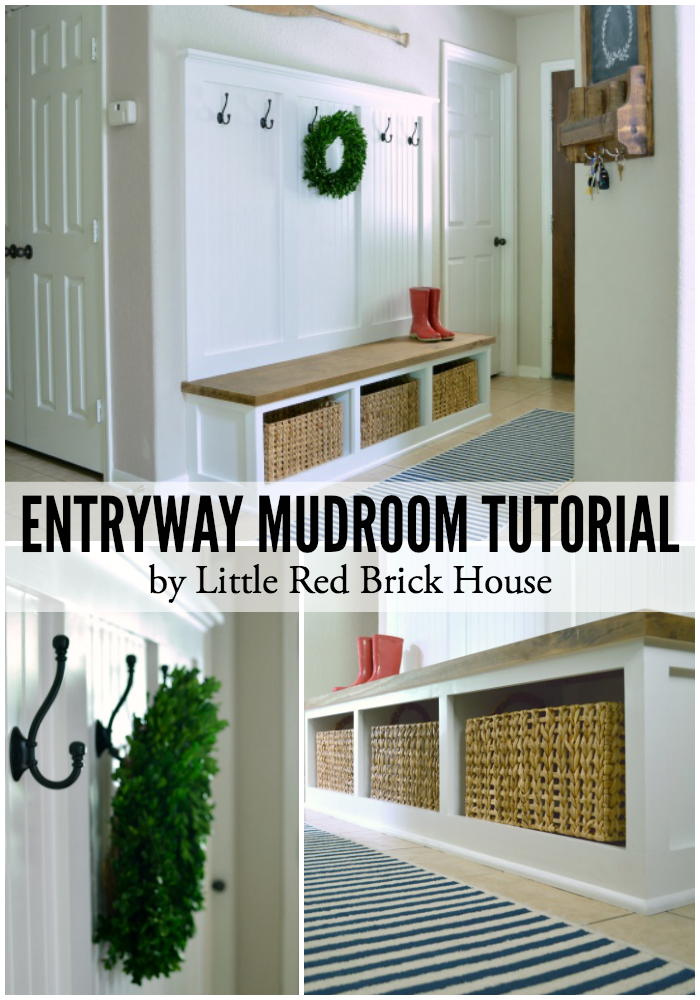 Creativity has been a huge part of my life since I was a little girl, and now that I have a home of my own, that love of creating has spilled over into decorating. My hope is to inspire others to dig deep to find their style and creativity so they can turn their home into a place all their own.  >>>

Hi, friends! Just wanted to update you on the late

Show of hands....how many other people are still d

TGIF! This week has been a doozy! Between all of t

Happy Sunday, y’all! The boys are headed out for